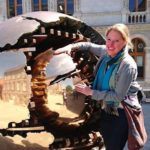 Busy researching how the slowdown of our lives at the moment is reflected in seismic data! Ask me about this and more!

No questions to show